Like Joel Katz of Bedlam Farm Journal, I think that the case of these horses, well- kept but attracting the attention and money of —  I can’t soften it,  deranged animal “Rights” activists,  possibly backed by the money of cynical real estate interests– is emblematic of our “rather stupid time” (Ortega), and a preview of what every one of us who lives with ancient human- animal memes– dog breeders, houndsmen, pigeon racers, falconers, sheep herders, ranchers, dog trainers– faces. Name it– there is some fanatic in a city near you who has never kept, never mind bred or worked with, any animal, and that person  is determined to take your animal away and “rescue” (or kill) it,  to at best, a puzzled life behind bars with no work.

“Have you ever been absolutely hated by an animal rights
activist? I mean HATED so much that they wish to obliterate your very
existence. HATED so much that they vow to destroy you and your kind no
matter what it costs, monetarily or in decency? HATED so much that your
very humaneness and your families identity and legacy and traditions and
whatever else you hold sacred and dear are threatened with a campaign
to destroy any trace of your existence? What is it about this kind of
activism done in the name of loving animals, that loathes humankind to
the point of what appears to be utter insanity?”

And this, from yesterday

“The next thing that surprised was learn that the campaign against the
carriage horses was not  a debate about the horses, or an argument
about animal welfare or the future of animals in the urban world. It was
an ideological assault – personal, brutal and relentlessly cruel –
against the people who owned and drove the horse carriages. To
understand this unnecessary controversy, it is first essential to
understand that. It has always been about attacking and dehumanizing the
drivers, who have been called thieves, torturers, abusers, immoral,
callous, greedy, liars and inhuman or less than human beings.

“This is always the language of hate, the precursor to persecution,
the ugly advance work necessary to demonize people to the point that
their freedom and property can be taken away by the so-called moral
community around them. Earlier this year, one of the gentlest and most
beloved of the carriage drivers approached the mayor at a public event
with his young son. He asked the mayor why he was do determined to ban
the horses, and the mayor said “because your work is immoral.” He said
this right in front of his son, and then turned away. He did not speak
of the horses, he spoke of the character of the people who drive them.

“There it was, from the mayor’s mouth to our ears. It is about the
people, not the animals. The story has never been about the welfare of
animals, not one animal on the earth will lead a better or safer life if
the carriage horses are banished to rescue farms and slaughterhouses.”

This not young photographer, recovering from open heart surgery and for no reason but that he understands working and domestic animals and can see and think and feel, is the most eloquent defender of our Old Ways on the web. I check him every morning, and you should too. Thanks, Jon, and keep up the good fight.

UPDATE in progress. I am writing this out of saved material.  Libby informs me that Jon is apparently putting his farm up for sale, as his health is shaky. I hope he continues writing and making beautiful photos, but our hearts are with him whatever he does. His eloquent defense of working animals is something we can mine as long as deracinated urbanites try to deny us contact with (CS Lewis phrase) “other bloods”. 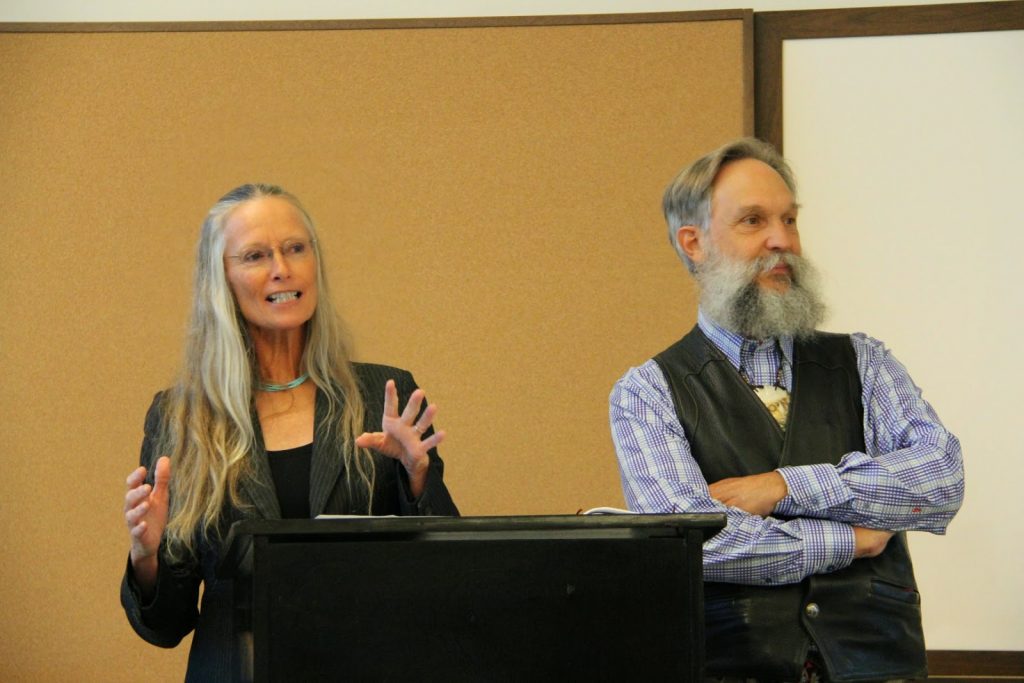 The first weekend of the month, Connie and I were in Tulsa, Oklahoma for a special event at the fabulous Gilcrease Museum. The museum had an open house with a number of lectures and other events to celebrate the opening of a new building they just added. Connie grew up in Tulsa and was very familiar with the Gilcrease, but it was my first visit. I was blown away by the quality and quantity of the western art and prehistoric artifact collections there. I would recommend anyone visit if they have the opportunity.

One of the lectures was given by our old friends, authors Kathy and Mike Gear. They gave an interesting and entertaining talk about why and how they write their archaeology-based novels. Their latest novel, People of the Morning Star, is the first of a series of three set in the prehistoric Mississippian metropolis of Cahokia.

Early yesterday morning, these two young bucks were busy noshing on my neighbor’s lawn and shrubs.

Suddenly, my neighbor came out her back door with her dachshund, who saw them and barked once. The two boys dove to the bottom of the arroyo that was just a few feet away.

They hung out down there with a doe and her fawn, who had been eating sumac down in the arroyo bottom. They were anxious to see if that dachshund was coming after them. 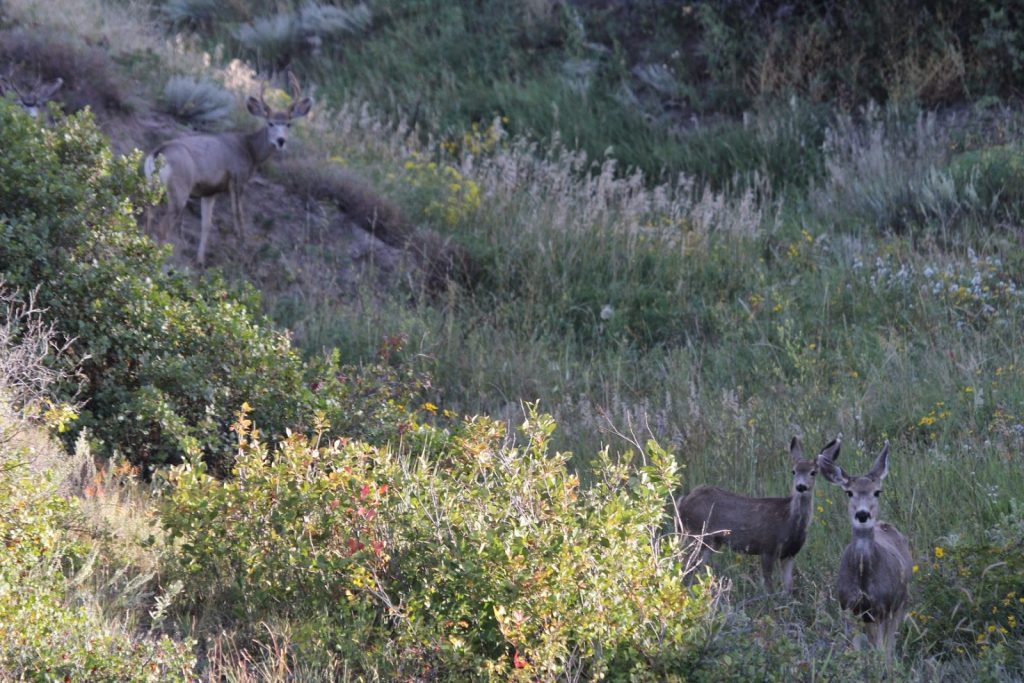 Then they noticed me, standing on the bank of the arroyo. They wanted to go down the arroyo and back to cover along Bayou Gulch. You can see the doe’s ears swiveled back, listening for the dreaded dachshund. I was between them and Bayou Gulch and they didn’t like it. I didn’t keep them in suspense for long.

One final thing – look at the dark mark on the forehead of the buck in the rear. I don’t remember seeing anything like on the muleys around here. Maybe someone who knows more about them than I do can comment.

Friend of the blog Paula Young Lee, writer and hunter, traveler, sometime resident of Paris France, Paris Maine, and Wellesley Mass, has won the Gold Medal for travel book from the Society of American Travel Writers  for her book Deer Hunting in Paris. I bet it could as easily win one for hunting book, or food book, or even tangentially for a sort of Po- Mo criticism.

The judges said: “”Eudora Welty, who believes all good writing must have it, speaks of the sound of a voice. And what a voice here! Resonant with images and descriptions, detailed observation and reporting, it soars — from a coot recipe to church suppers. Paula Young Lee saw a lot of the latter because her father, who came to this country from Korea with her mother after the war, served as a Methodist minister in various small town churches in Maine. Growing up there instilled in her a love of hunting, a match for her interest in cooking.”

Paula has complimented me by agreeing to do an intro for the new, third edition of my book of essays On The Edge of the Wild. As she is the only one doing an intro that I have not met, I was a mix of eager and scared. Suffice it to say I need not have worried! With Vadim Gorbatov on the cover, with its third Goshawk portrait (in this one the Gos catches a Pied crow in the snow outside Vadim’s Moscow apartment building), it will be an attractive package.

I have recently been persuaded that if I am going to write books I must sell them, and I haven’t been;  people of my age and background have a horror of calling explicit attention to themselves; somebody else should do it. But there is no budget for promoting books that are not expected to have a shot at the NYT Best Seller List.

I am not sure if I even want to show you the figures for my “book of books”, the so- called Sportsman’s Library; enough for now to say its sale numbers are a LOT lower than the number of hits I get every day on this blog. I assume nobody but old friends knows exactly what I write, even if they read the blog.  How would they?  Apparently, I have to add my new editions to my Amazon page!

I had decided already that the five backlist titles would be graced with new covers by artists I knew and liked (well, and one with a photo by me), and intros by people younger, smarter, and more famous than I, not to mention generous…

So far so good, and much more to come! Expect backstories, excerpts, tales about artists and publishers good and bad; even guest appearances, to convince you not only to buy all my books for yourselves and for birthdays, but to buy ten of each for Christmas. You are warned!

Larissa stayed with us for a week while Shiri visited the coast. Here she is reunited with her, as mother Ataika competes for attention.

Last week, on a hot late summer day, Libby noticed an unusual butterfly feeding on the back yard flowers, so placidly she was able to get me out to photograph it. It was the color of a Luna moth but obviously a butterfly; the raised, leaf- like ribs on its wings had me wondering if it were a “stage” in leaf- mimicry.

I asked John Wilson (who knew what it was) to send it in “officially”, and received the word that it was the first record in Socorro county and a rare one for this subtropical species in New Mexico.

I will not attempt to get everything out immediately. Suffice for now to say that the “gathering of the clans” was a success, and that we all had fun. Jim blogged our night at Malcolm’s signing here. More photos:

A Central Asian dinner, with Russians metaphorical and real:

And art, and guns, and TALK (quoting Jim: “… endlessly fascinating and wide ranging conversion; writing and writers
(good, bad, and obnoxious), falconry, guns, pigeons, more guns, food,
wine, and music. A woefully incomplete list of topics I can recall that
were mentioned or discussed included: Annie Dillard, the post-punk band Mission of  Burma, mushroom hunting, Johnny Cash, the eccentric Oxford naturalist Jonathan Kingdon, Remington Model 8 rifles,  Mauser Broomhandles (especially
regarding the merits of the 7.63 Mauser cartridge over the 9mm Luger
chambering), Annie Proulx, the 1903 Mannlicher Schoenaur rifle,
technical details (that were beyond my ken) of evolutionary biology of
horses, dinosaurs, birds and lizards…” 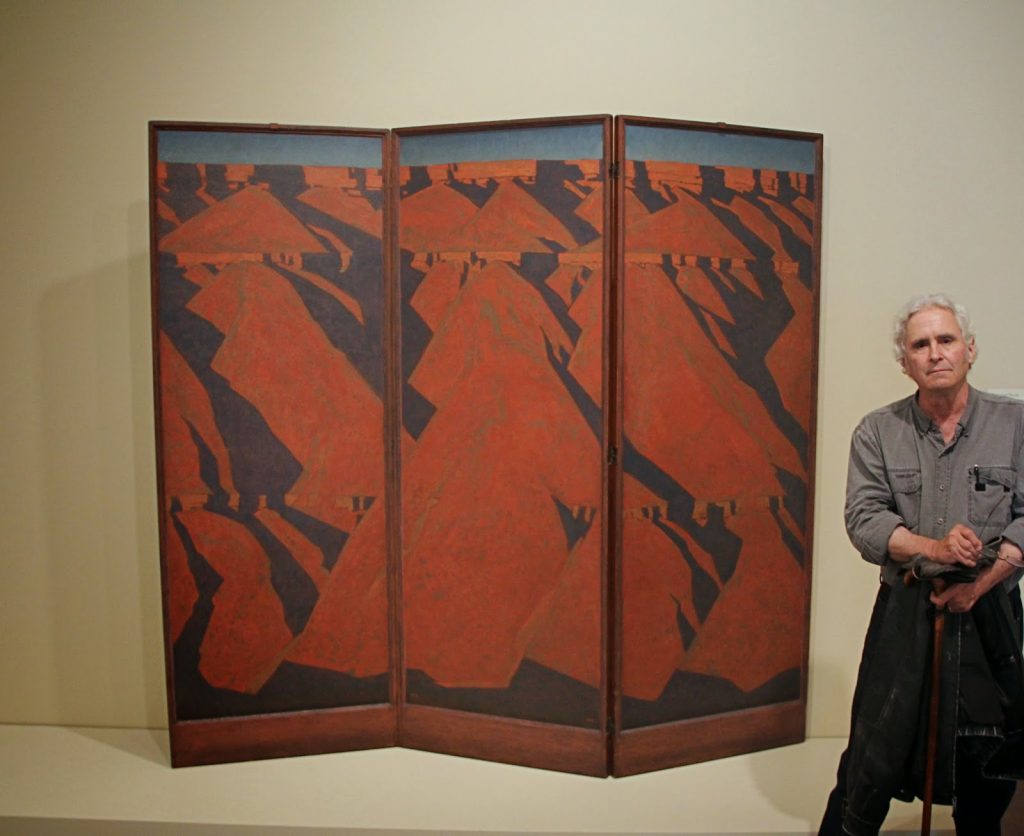 Eating a well done steak is not unlike eating an alarm clock.

Off to Denver for a reading by Malcolm Brooks, for Painted Horses. Not sure if, this fall, I might  not take a short or long break, as things get more physically difficult and slow, as work gets shunted to the side by more ephemeral writing. ??

Bear with me, and wish me luck…