Randy Davis wrote me today to tell me about a signing for Tom McGuane’s new book– I will delay getting it until I can get an inscribed one in Denver. He was at the Strand with Tom Brokaw.

“My oldest son went to see/hear the McGuane – Brokaw show at  Strand  Books in Manhattan.  Late in the session there was the usual question about what are you reading now, McGuane answered  and I’m paraphrasing, a lovely book that I thought had no commercial prospects, but has proven otherwise: H for Hawk.”

Otherwise indeed! Two big time British literary awards for a personal memoir with falconry is unusual. But I am not sure anyone I ever knew has had as meteoric a rise as Pluvialis in the US…

Partisan? You bet! But consider: this past week she had TWO NYT rave reviews , one Wall Street Journal, one Atlantic, one “Daily Beast”, a long article about her with a photo in the New Yorker, and an NPR interview on Wednesday in which she quoted me– on my birthday! A fine present for my slightly scary 65th…

So in her honor, from her blog Fretmarks, a 2006 description of a Gos in the riparian forest on the Syrdarya in Uzbekistan. You may want to go out and get H is for Hawk when you finish. 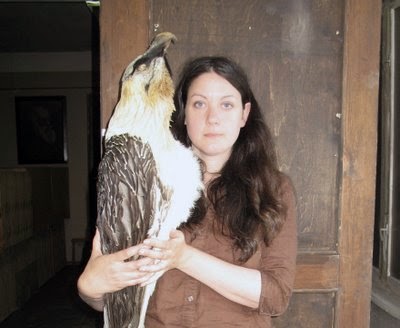 “Just near here, I looked up and thought I saw a man standing in a tree.
That’s what my brain told me, momentarily. A man in a long overcoat
leaning slightly to one side.

“And then I saw it wasn’t a man, but a goshawk.

“Moments like this are very illuminating. I’d never thought before, much,
about the actual phenomenology of human-hawk resemblance, the one that
must have brought forth all those mythological hawk-human bonds I’ve
studied for so long.

“I looked at a hawk in a tree, but I saw a man. How curious.

“This goshawk must have been eighty feet away, so dark against the bright
morning sun, so I couldn’t see whether he was facing me or the river.
His short head and snaky neck craned: he was looking at me.

“I raised my binoculars to my eyes as slowly as I could, half-closing my
eyes so my lashes fringed the glare. There. There he was. The glare
wasn’t so bad. I could see his edges very clearly. The light was very
bright. But I could also faintly see the horizontal barring on his chest
feathers. This was an adult male goshawk, and he looked very different
from the ones at home. He reminded me of old photographs of goshawks
flown by falconers on the northwest frontier. Hell, he was
one of these goshawks. He had a dark, dark head with a flaring pale
eyebrow, and the bars on his chest were close-set and far from the hazy,
broken lines of European birds. Imagine tracing—with a ruler—each
horizontal line of a narrow-ruled notebook with a thick, dark-grey
felt-tip pen. That’s what his front looked like, through the glare. And
he was standing on a bare branch and making up his mind what I was,
exactly, and what he should do about it.

“Slowly, he unfolded his wings, as if putting on a coat, and then, rather
quietly and leisurely, he took to the air, one long leg and
loosely-clenched foot trailing as he went. I was astonished by how
long-winged he was, and how much he looked like a big — albeit
long-tailed — falcon. His shape was very different from the goshawks at
home. He was a migrant gos; he’d travelled down mountains and across the
plains to winter here.

“Happy Pluvialis! I wandered back to camp, had a snooze, compared bird
notes, smoked a cigarette and had a cup of coffee. Halimjan made soup
for lunch; there it was, bubbling in the cast-iron pot over the gas
flame and we were sitting around our red plastic table chewing on stale
bread waiting for the soup, and all our heads went up at once. A noise
like ripping, tearing hessian, like a European Jay, only with real
terror in it, was coming towards us right there
and we watched — and slow as syrup and fast as a blink all at once,
came the male gos trying his damnest to catch a magpie; they flashed
right through the trees in front of the table, and gos nearly had a foot
to the magpie before he saw us — five humans and a fire and a truck and
a Giant Red Table right below
him — ack! — wave off! wave off! — and the magpie dove downwards to the
fork of a branch, crouching like a man avoiding a blow, and the gos
spooled away through the trees. He looked like a coin falling through
water, flashing silver and grey. Some kind of metal. A very fierce one.
Potassium, Sodium, Goshawk.”