A friend in Alberta snapped this photo of Tom Russell and Ian Tyson in fine form at a concert up there. 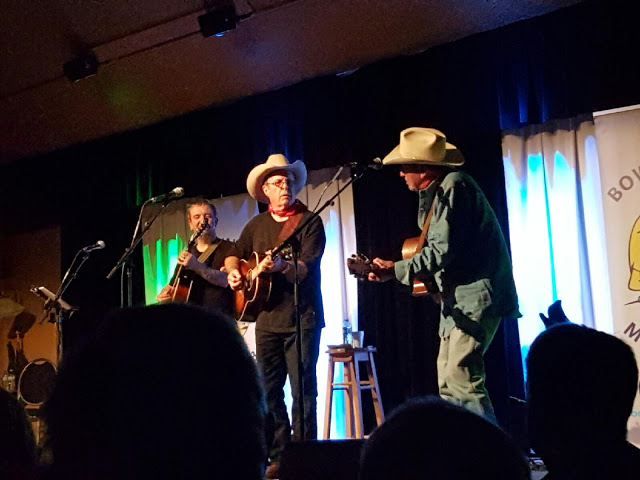 My informant said that he told a story of bringing his Swiss Father-in-law over the Continental Divide at night to visit us and our hounds and hawks. It could have been a fraught scene — “Poppi” says that his only English was “Fuck you, cowboy”, which as Tom said “went over real big with a bunch of drunk cowboys demanding encores of “Tonight We Ride”, but our French wine, our posole, and our animals disarmed him, not to mention my ability to speak French, and he now sends us German articles on falconry.

This story and many others are in Tom’s wonderful new collection of essays Ceremonies of the Horsemen. There are portraits of Johnny Cash and Marty Robbins, of Hemingway and Ian Tyson, Charles Portis and John Graves, and a piece on J P S Brown, a hard old man we both know who may be the best unknown cowboy novelist around. There is also that story about me and falconry, one about Gallo del Cielo (the “damn chicken song”) and the only English cockfight corrida I know, which will teach you all you need to know about cockfighting (and I don’t mean that sarcastically). It is a tragedy with laughs around the edges, although Tom has been known to claim that he wrote a version with a happy ending in which the rooster buys the Golden Spur Bar.
In the weirdest of these stories Tom ends up in the Swiss castle of Balthus’ widow, discussing their mutual admiration for Tex Ritter’s “Blood on the Saddle”. Buy this book! Nobody but Tom could ever have written it.