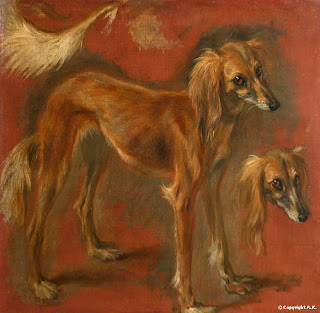 Another non- Arab or at least geographically North African portrait, from the Louvre, courtesy of Daniela. The given title as I got it was “”Un Chien de Barbarie”, but given the obvious I have changed the sex in the title!

Daniela called the portrait “a little ‘Taik”– see below (top, most recent, by GG)…

When I got Ataika from Kazakhstan years ago her people insisted that a good tazi would also work as a bird dog to the gun, and wouldn’t need much training. Atai has always worked as a hare courser and a falcon’s partner (see last weekend’s post) and during the one month she was taken out with a shortwing (a Harris) instantly adjusted her range and behavior to that too– I’ll put a photo below, at the end, as a reminder.

But starting in her second year and noticing her instant adaptation to whatever was going on, I began to take her out with the gun, exhorting her only to “hunt close” She like most of her kind was already a natural retriever. I shot a few rabbits and birds, and with no further ado she became as good a bird dog as my spaniels were, and as most of my friends’ labs (barring water– a certain desert fastidiousness still prevails there!) She hunts in shotgun range, checks cover, flash points and flags, usually– she uses her good judgment whether it is necessary– only chases birds after the shot.

She will be seven this year and I rather take this all for granted, but I sometimes get the feeling bird dog friends are a shade skeptical. This weekend, pursuing an article, I wanted to take out the four pound English .410 “one- hand” gun that has been hanging around on- spec for months. Photo op!

Unfortunately the Government trapper was in action on our preferred ranch coverts, so I went to a heavily hunted place and came up dry. But I think her style will leave little to doubt.

Closing up as we enter cover:

Coming in; no treat even needed:

And the gun– yeah, this one:

And one of Atai with the Harris a couple of seasons back– something I may now try with my own HH.

I should add: in none of these photos am I giving orders, telling her to heel, saying “hunt close” even. She is far past my commanding her to do anything but come in at the end of the day– then, she can be a little reluctant IF we haven’t caught anything! Otherwise a simple “Good girl Taik” suffices.