Is the Honeyguide the most gruesome nest parasite alive? The video is not for the faint- hearted, but check out the little blind monster hanging fby its bill from the naturalist’s finger in the still pics.

.
A plug for a good beer: when we were at Deep Springs Jack introduced me to “Icky Ale” with the dolphin- like reptile (so to speak) on the package. Many designer beers and ales seem to put more energy into their labels than their product, but this one is delicious . 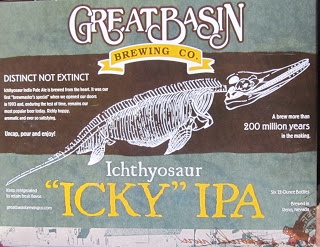 The Ichthyosaurs are from the famous “arranged” site that was interpreted at least half- seriously as being “art” from a giant squid or Kraken.

This infuriated some paleontologists, but stimulated others to play with the idea. A LOT of scientists appear to be H P Lovecraft fans, and the word was never far away. Mark Witton’s blog took time off from Pterosaurs to do a genuinely original Chthulhu, flickering interdimensionally rather than just sitting there like a winged man with a cephalopod’s head.

The best, and the scariest, video I have ever seen of desert flash floods.

Over 20– almost 30 years ago, at about this time of year, Floyd Mansell, his then teenaged son Phil, Betsy Huntington, and I were shooting doves north of town and were cut off by such a creek. Phil was amazed by my amazement. “Doesn’t the water do that in Massatooshetts?” Nope, and you don’t lose pickup trucks in it either, as you might if you attempted fording this one.

One more selected bit of eclectic weirdness from the world and the web: a functioning wooden model of a Desert Eagle autopistol.