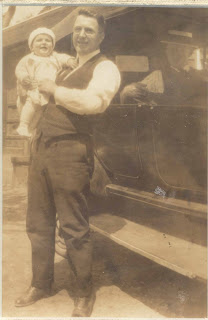 When the young artist returned from the war with his fancy New Mexico pointer and his already antique car, his father told him to take his rich man’s dog and car and get them out of his house. Remember that grand car? 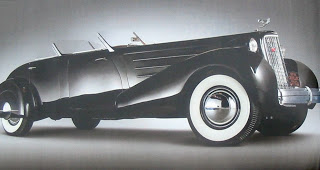 After flying those missions over Germany Joe felt he was no longer the innocent immigrant’s son who had left Boston, and Rico was never one to back down either. Knowing all too well his stubbornness (which I have I suppose inherited) I can only imagine the scene. Picture these two going head- to- head: 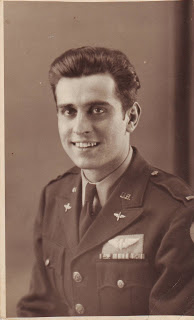 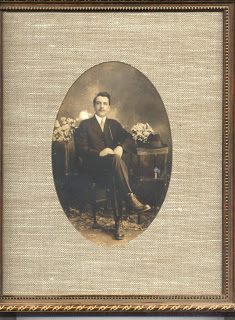 Now cut to 1984, about 36 years later, as Betsy Huntington sips Jack Daniels with father and son and gently coaxes out a tale, the son listening raptly as the father finally talks.
(Joe, Betsy, spaniels about that time and maybe even that day): 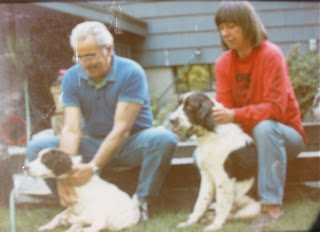 “So I got a studio with the two other most talented students I knew at the Museum School, a vet like me and another younger guy who was even more talented. Pretty soon the first guy had a nervous breakdown, and I figured out the other guy was gay. My father always insisted all artists were either crazy or queer.

“My uncle Carlo Arzeni in Mexico City was a big hotelier and said I could come down, manage a hotel for him there or on the coast, and paint, but your mother was doubtful and I wanted security. Remember, we were depression kids.

“So I gave it up. I enrolled in Carnegie on an engineering scholarship and became an engineer.” 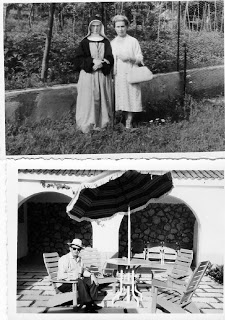 He paused. I could not even than imagine the hard won melancholic wisdom achieved by a man who had joined a company at the bottom, rose to be president and owner, raised nine children with my mother (who was for a brief time a commercial advertising fashion illustrator and never gave up the sense of herself as an “artist”), become rather rich for a while, and then poor again in the Massachusetts economic crash of the Seventies. A man who loved all field sports from bird shooting to fly fishing and blue- water big game, who in his prosperous years imported world- class pigeons and who now sat with us sipping whiskey in his basement den after midnight. He had attained a measure of serenity, and was never quite so broke that he was unable to get to his beloved St Croix in the winter, but now I shot his guns and cast his flies. He is a little younger than I am today in this Caribbean photo. 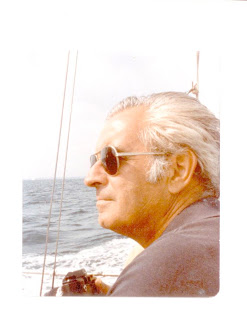 “I never told him”– he looked at me–“but I’ll be damned if he didn’t do the right thing. He wrote and told me to shove it and now he is doing what he wants. I’m proud of him.” He raised his glass to Bets. “I gave up art for security. My mistake. I am old enough to know now. There is no fucking security in this world.”

Just for fun: a shelf in the library has accumulated a bunch of photos with this theme, dating from the thirties (Betsy Huntington) to just eleven years ago (me). Here are a few.

First, Betsy, at four, with her mother, at the Pyramids: 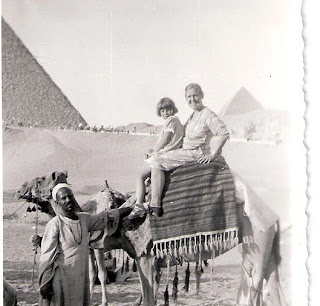 Second, Libby on an elephant, in the early seventies, at TIGERtops (see below) in Nepal; looking for tigers, of course. 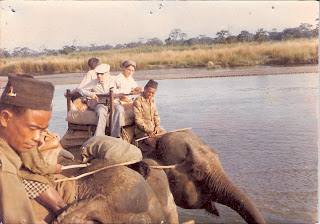 Me in Zimbabwe in ’97, just before it all went to hell, with an orphaned rhino. God, I look like Redmond O’Hanlon— Anglos in the tropics, fat and sweat and curly hair, oh my. (The head ranger there, when I asked him why he was successful, answered with great gusto and a big grin “because I kill so many poachers”. Tough neighborhood). 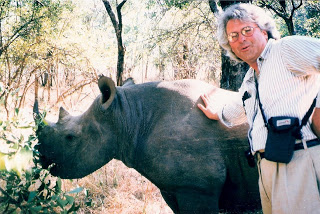 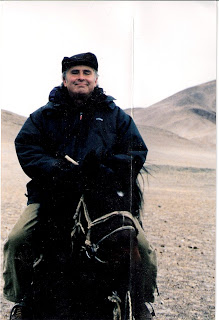