From Sir Terence Clark: a photo of Chini Bagh, the old British consulate in Kashgar, home at one time to Eric and Diana Shipton (who both wrote excellent books set there) and George Macartney, way station to Paul Nazaroff as he fled the Bolsheviks, famed in story and still standing, a monument to climbers and diplomats, spies and fugitives…

Terence tells me it is a museum now. I am vaguely surprised that the Chinese are that kind to such an imperial remnant. 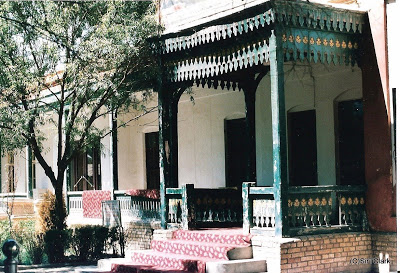 Tim Gallagher points to this BBC video of Golden Eagles hunting reindeer, and reminds me that a link to my piece on Darwin’s pigeons is up at Living Bird.

Meanwhile MaryBeth Rogers sends this link to paragliding with eagles (well, mostly vultures, but it still looks like fun!)

An unfortunate Golden eagle was taken from a falconer who had rescued it and given to the RSPCA, who managed to kill it.

“Mr Lupton sought permission from the Scottish Executive to remove the bird and nurse her at his specialist premises at Hollingsbourne. Without authority he would be liable to a £5,000 fine and up to six months in prison for removing a bird from the wild.

Mr Lupton said that he told official from the Department for Environment, Food and Rural Affairs (Defra) about his plans. In May 5 his home and aviaries were raided by three officers from Kent Police, a policeman on secondment to Defra’s animal heath section and a wildlife crimes investigator from the Royal Society for the Protection of Birds.

“I explained everything to them but they were adamant they were going to remove the wild golden eagle and accused me of the illegal theft of the bird and keeping an unregistered bird,” he said.

“But what really appalled me is that they had no understanding of how to deal with such a bird. They brought the wrong box to carry the bird, I had to lend them one of my own.”

“The bird was taken to the Mallydam wildlife centre in Sussex, run by the Royal Society for the Prevention of Cruelty to Animals. Mr Lupton was formally questioned by police, who passed the matter to the Crown Prosecution Service, but the case was dropped.

“He was concerned about the eagle’s fate and was allowed to visit the premises with his vet. “I was horrified by what I saw,” he said. “The RSPCA was keeping the bird on a concrete floor, which is bad for its talons, and there was leaf mould on the roof of the room, which can cause lung infections in golden eagles.”

A month later he was allowed to take the bird home. Her condition had badly deteriorated and his local vet took blood tests. The bird was found to be suffering lead poisoning and Mr Lupton learnt that it had been fed on rabbits which had been shot with lead pellet.

On June 17 he took the bird to a centre in Swindon run by Neil Forbes, an avian veterinary surgeon. The eagle died 12 hours late.”

But at least he wasn’t used for FALCONRY. HT Annie Hocker.

Also from Annie H : raptors are at serious risk from Avian flu.

On a cheerier note; pigeons are still being used to carry messages (in this case photos) in Colorado. I wonder if they still have to throw out decoy birds for the falcons first like the old Grand Canyon boatmen did?

I know that there have been a lot of furious discussions over DOG inbreeding. But now it appears that the honeybee crisis may well be BEE inbreeding!

A BBC news article seems to point to the “Overkill Hypothesis” as the major cause of the extinction of the American megafauna.

Studies of dung preserved in a Wisconsin lake suggest

“This discovery rules out one idea that the extinction might have been caused by an extraterrestrial object striking Earth 13,000 years ago.

“This study is exciting because we’re getting some solid data about the ecological consequences of the removal of these animals,” said Ms Gill.

The last may have some bearing on my Passenger Pigeon project, A Feathered Tempest.

The Eleanora’s falcon already leads a weird life, nesting on Mediterranean islands in the fall to intercept the songbird migration. Now it appears to also make one of the most amazing migrations.

“In total, the bird flies more than 9,500 kilometres across the African continent from the Balearic and Columbretes Islands before reaching the island of Madagascar. Some of the previously-obscure secrets now revealed by the scientists show that these falcons migrate by both day and night, and cross supposed ecological barriers such as the Sahara Desert.” (HT Laura Niven).

A gallery of the wild apple forests of the Tian Shan. I have been there let’s hope they don’t all fall to villas for rich Kazakh businessmen. (HT David Williamson).

A couple of weeks ago my mouse and keyboard failed. When I replaced them I realized I needed to update the software. Our Mac guy in Socorro installed all that but then decided to clean its gritty interior.Bad idea– when he put it back together it refused to start.

He sent it to a Mac place in Albuquerque where they informed him that our ten year old EMac was “obsolete” and that they wouldn’t fix it. Two more said the same.

He persisted and found a fellow who worked on “legacy” Macs. Who found he couldn’t fix it and recommended we get a used modern IMac, at which point he would transplant the data to it from the old hard drive.

Then he called and said it wasn’t working. I went to the bar.

Next morning, fortunately, he had figured it out. So I am back in business, with an enormous backlog of both blog material and work. I will be catching up for days I expect, but I am back! 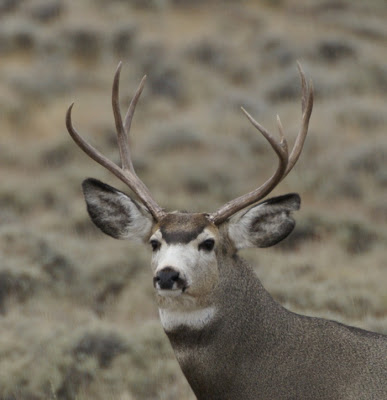 I am surprised at how many mule deer I see with notched ears, including this young buck Jim and I encountered today. Theories anyone? 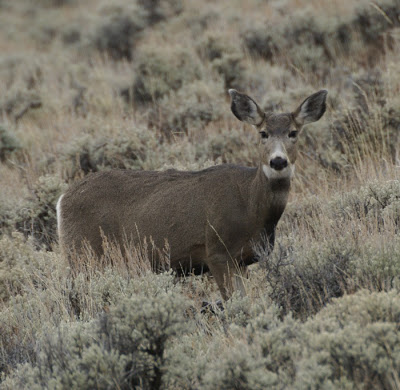 I love seeing mule deer at this time of year. The does look so absolutely feminine, and the swollen-necked bucks so masculine. 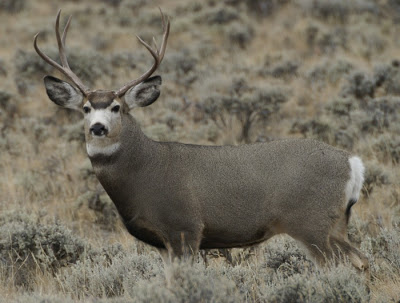 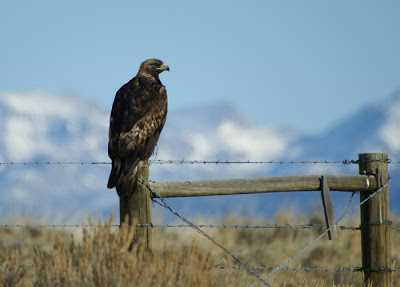 The migrating goldens are starting to make their way back into western Wyoming for the winter. I’m very glad. 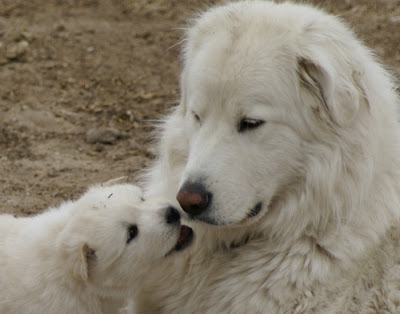 My warped husband has decided to name Vega’s three livestock guardian dog pups after his siblings, Bill, Mikey and Laurie. This is Laurie visiting with Rena. Rena loves playing with the pups, now that Vega has decided Rena can be trusted with them. 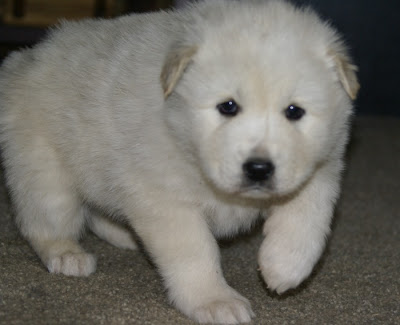 Five weeks old, and Laurie acts like a big dog. She has no idea she is not. 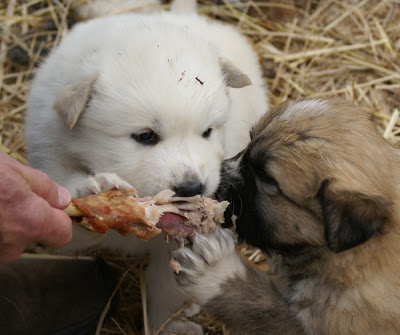 Laurie and Mikey growl as they feast on a turkey wing held by Jim.

Laurie came in the house to help me with a piece of turkey. (We had our Thanksgiving feast today, since Cass was home from college. On Thanksgiving Day, he’ll be rock climbing in Moab.) 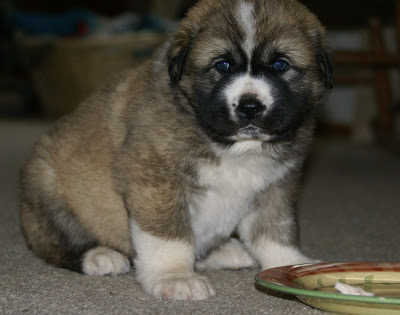 Bill is a giant, and very serious.

Bloomers blowing in the wind? Some people apparently don’t like that. Read about those fighting the good fight – the “right to hang.”

Two California cities have voted to ban the declawing of cats. They took this action ahead of start of the new year, when state law forbidding municipalities and counties from regulating veterinary medicine goes into effect.

A Kansas couple was arrested after reporting to the cops that someone had stolen their marijuana. 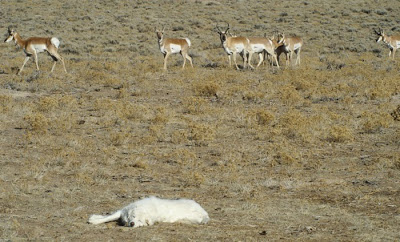 Some things simply aren’t worth getting excited about.