I took a bunch of Mongolian artifacts to the Magdalena Library Saturday as visual aids to a talk by my friend Ian Jenness. He and his wife had taken the Trans- Siberian to Lake Baikal and Irkutsk, then dropped down to Ulan Bataar, spent a week or so in Mongolia in ger camps, then continued by rail through China.

I bought snuff boxes and 19th Century books and clothing and a muzzleloader and folk paintings, and several images of this guy:

Though he looks monstrous to Western eyes, he is in fact supposed to be a fierce protector; one of his “jobs” is Protector of Monasteries. This may well have special relevance to Mongolia in the past (and Tibet in the present?) Although Choibaltsan is sometimes called the Mongol Stalin, and ruled for about the same span of years, his reign was marked more by stultifying bureaucracy then terror– except for monasteries and (as always with dictators?) minority tribes. I was once shown a cave where he had ordered 30 monks burned alive in the 50’s, with soot still visible on the roof. It was refreshing to know that the family who showed me the cave were the proud parents of a novice monk, who took a day off to join us at our feast at their summer ger.

(From Wiki: ” Choibalsan oversaw violent Soviet-ordered purges in the late 1930s that
resulted in the deaths of an estimated 30,000 to 35,000 Mongolians;
mostly Buddhist clergy, intelligentsia, political dissidents, ethnic Buryats and Khazaks, and other “enemies of the revolution.” His intense persecution of Mongolia’s Buddhists brought about their near complete extinction in the country.”)

But wait– there is more. Mahakala is also the genus of a small but taxonomically important feathered Mongolian Dino, a sort of roadrunner with a bony tail. 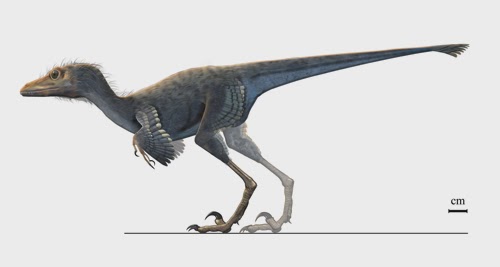 Brian Switek writes about his discovery here; and Carl Zimmer tell us how his lineage illuminates the bird- Dino lineage here.