Georgia friend Gil Stacy has more sense than we did when I hunted Woodcock: he keeps some for the summer mushroom harvests… chanterelles in this case.

Also notice the color of the cut flesh. Like all good Woodcock (and snipe) cooks, he
sort of passes them through a very hot oven. I get tired of hearing how dark- fleshed birds “taste like liver”- good LIVER doesn’t taste like liver when it is cooked rare, turned over quickly in hot bacon fat and butter. My disgusted French- born gourmand friend Guy de la Valdene, after he read an American recipe for woodcock that involved two cans of cream of mushroom soup and an hour and a half in the oven, wrote (in Making Game in 1990): “As this recipe negates the whole reason for killing the birds in the first place, why not take it a step further and poach the Woodcock overnight in equal parts of catsup, pabulum, and Pepto- Bismol.” 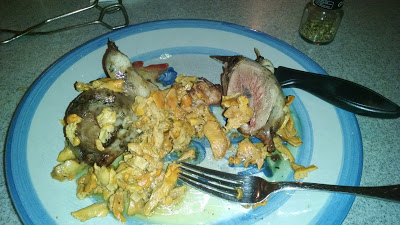 I need to hunt Woodcock again before I die.  First pic below by Betsy Huntington from 1976, with her Parker 16, in Easton MA in the coverts I grew up in, no longer open to hunting but mercifully preserved from development as a park; second Bar Mills ME, 1987, the year after her death, in a place I still hope to hunt again, with Bart and Darne. 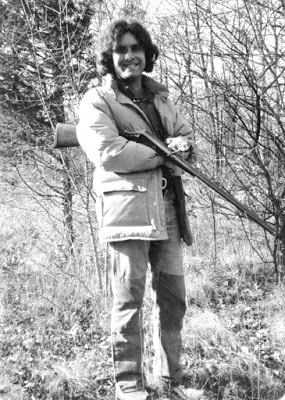 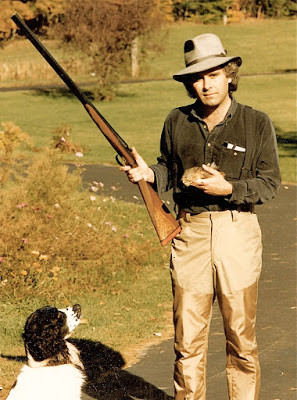 Incidentally, the greatest (and most undeserved ) compliment as a cook I ever had was by Russ Chatham at his old place in Deep Crick, when he and Libby and Guy and I had whipped up something impromptu and good.All I remember now was that it had sweetbreads- Guy I think– and Risott’, from me. Russ suddenly burst out with “This is so good I wish I had FOUR cook stations so we could all cook at once, all the time!” Russ is an emotional half- Italian like me, and  think it was the magical wine from his legendary cellar talking, the best I have ever had, usually with labels falling off. Surely Jim Harrison would have been a better fourth cook. But I will take my compliments when I get ’em….