Or at least banging my head against…

My sometime neighbor for almost 20 years, Rolf Magener, is sort of a professional traveler (at least when he is not stopping at the apartment of a Swedish countess in Buenos Aires, where I just sent my copy); two years ago he was sailing across the South Pacific, and he sent me my treasured photo of Chini Bagh in Kashgar, but he touches down here periodically. He is now trying to make some money at it by publishing Overland Traveller (Brit spelling), an online travel mag with splendid photos and good advice. I contributed a piece on Malaria, mine and an update on the disease, in his initial issue; in his latest, on Asia and especially Central Asia, I had more fun riffing on the northern Silk Road…

Still another time, we sat in a French restaurant in
UB, run by  an African woman
from Senegal who had married an American Peace Corps volunteer from
Philadelphia who took her to UB and then divorced her; she landed on her feet,
teaching African spices and French wine to young Mongolian girls. Passing in
the falling snow on the boulevard below, we counted: a herd of sheep, a camel
being led by an ancient granny, many Russian motorcycles with sidecars, many
Mercedes of various vintages; horsemen, Ladas, Chinese “jeeps”, a
Suburban with black windows (Mafia, they say). UB is a postmodern cyberpunk
city at the heart of Central Asia, with whole suburbs of gers, stretching as far as you can see, with
horses and guardian mastiffs chained and threatening, and television antennas
and motorcycles…”)

Rolf is German, younger than me, and grew up mostly in South Africa and Spain; the only property I know of that belongs to him is in our county, a few acres on the west side of the Magdalenas. But remember this book cover? I put it up as a tease last month. 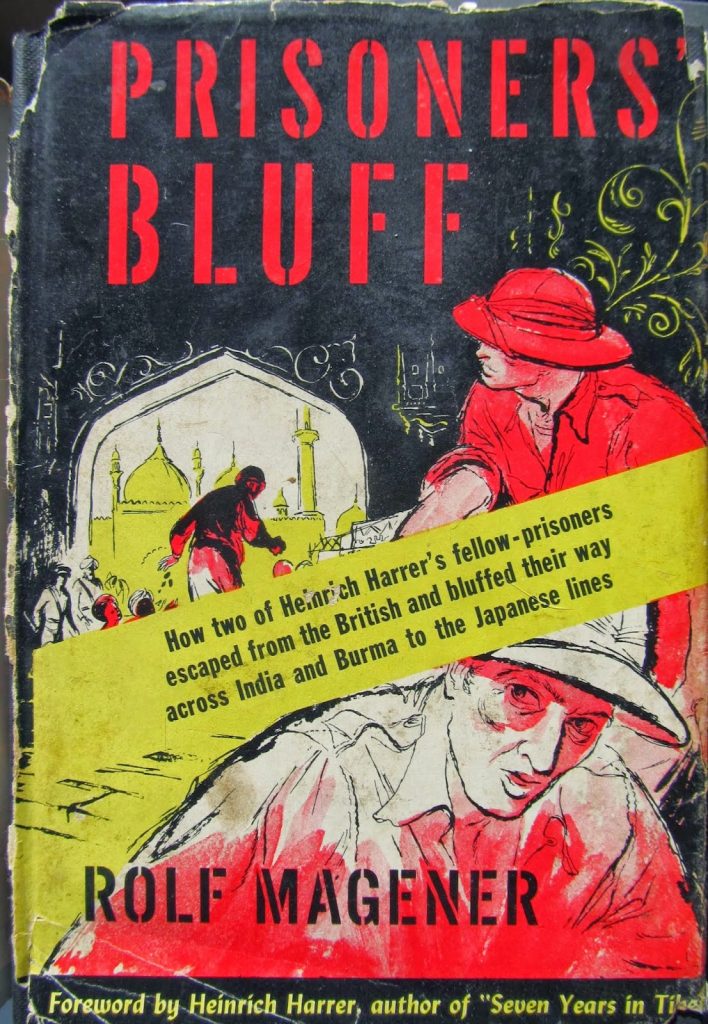 Our Rolf is the namesake of the author, his uncle, who was one of the German climbers interned in northern India with Heinrich Harrer at the outset of WWII. They broke out and “one went NORTH”, to misquote the nursery rhyme– Harrer, to his seven years in Tibet, fame, and eventually a movie starring Brad Pitt; and one went EAST, Magener, to Burma. But I guess that to many Burma was not as romantic as Tibet. and nobody ever made a movie Still, a good book. Mine is signed by the younger Rolf.

.. and irreverent true quote, by Rob Macfarlane (who is as fond of Paddy Leigh Fermor as I am):

“This was the man whom the travel writer Robert Macfarlane, reviewing Ms.
Cooper’s book in The Guardian, called “a mixture of Peter Pan, Forrest
Gump, James Bond and Thomas Browne.”