.. and going mushroom hunting. Yesterday at around 11 PM Libby finished the last book cover scan for the book of one hundred books; by midnight I had them back on the shelves. After almost two years of writing two books to deadline– what next?

Well, start to write a couple more I suspect. But also begin handling my hawk, clean out pigeons, pay attention to my bored hounds….

But first– as the drought has broken and the monsoons returned, off to the San Mateo Mountains to hunt Boletus edulis, the uncrowned king of mushrooms; the cepe; porcini. We had such a good harvest three years ago we are just running out now, but we need to fill at least three five- gallon jars with dried slices. Below, scenes from other years… 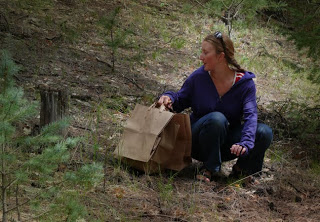 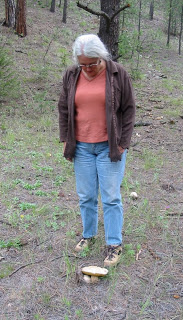 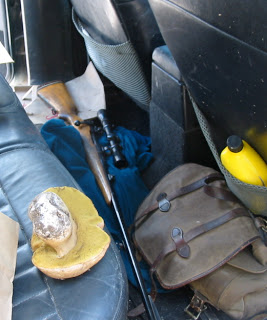 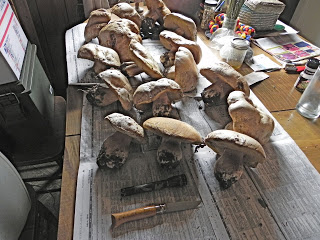 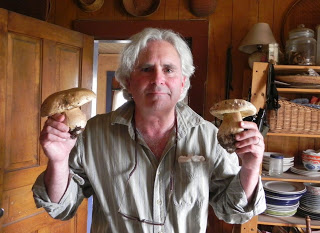 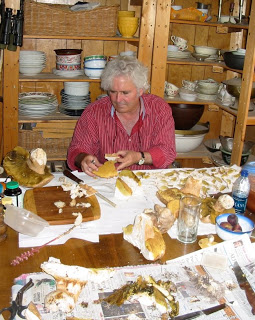 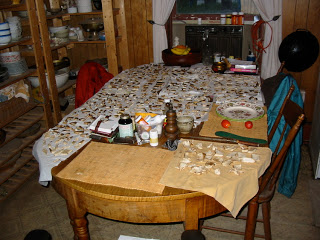 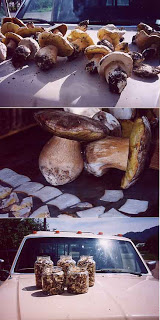 .. amidst the chaos of book- ending: dog- in- laws Dan and Margaret of Shot on Site, Hare- Brained Express, etc etc, who have bought a bookstore in Deming, dropped by with seven- month old “sisters” Dragon Tatoo (“Toot”), the deerhound, and granddog H1lda (not a typo), who is from Lash and Plummer and Dutch Salmon’s dogs and Chris Mason’s galgos; in short a New Mexico longdog. Good times, good conversation, and good food, then back to work or on the road… 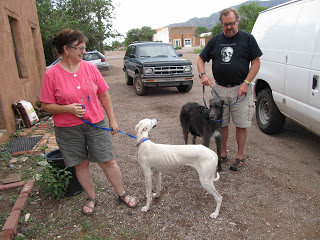 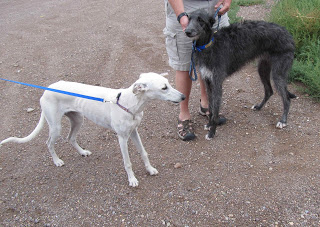 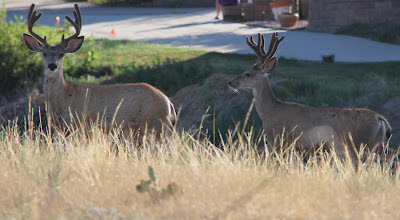 I saw a half-dozen bucks browsing out behind the garage early Sunday morning. All of them still had their antlers in velvet. 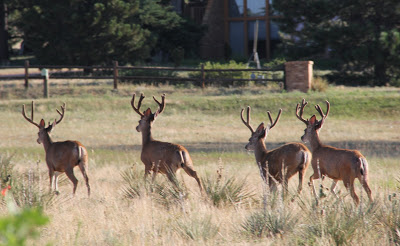 Though I had left the dogs inside and tried to walk slowly and calmly, these fellows didn’t want to have anything to do with me. I was looking through my photo records, and I believe these are the only pictures I have of velvet antlers. 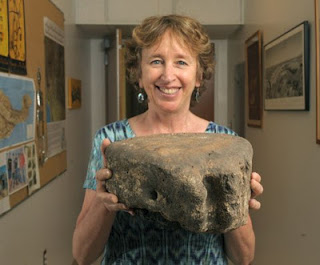 Archaeologist Lynn Gamble of the University of California – Santa Barbara has found traces of the historic Chumash village named Syuxtun located in what is now downtown Santa Barbara. That’s a picture of Lynn holding a whale vertebra recovered from the site. I was just looking up Syuxtun in the Handbook of North American Indians, and in 1769 when Gaspar de Portola visited he reported it had a population of 600, consisted of about 40 houses, and that the canoe chiefs had 10 tomol canoes based there. Interesting finds but bad news for developers.

The NY Times has a very interesting interview with paleoanthropologist Chris Stringer with lots of good information on recent developments in the study of human origins.

Big finds in the archaeology of clothing – archaeologists have found 600 year-old brassieres in Austria.

A study of the evolution of dogs tells us why they love chewing bones.

A team of forensic cadaver dogs has been deployed to look for human cremations and burials near a proposed wind farm in Imperial County, California. They are finding quite a few, which isn’t surprising: I ran an inventory less than 5 miles east of this location a few years ago and we found just under 30 cremations (without the use of dogs). I’ve seen demonstrations of these dogs at work and it is the real thing. We recently used a team to relocate a lost historic cemetery so our client could avoid it with his transmission line.

The title of this article pretty much says it all: Cult Busted for Eating Sorcerers: New Guinea group thought witch doctors were charging too much.

A study of tree-ring data from northern Europe shows that temperatures during Medievel times were warmer than they are today. Climate scientists and archaeologists usually refer to this as the Medievel Climatic Anomaly (or MCA) and it is believed to have been a contributor to all sorts of events seen in the archaeological record – among them the Anasazi abandonment of the northern Southwest. This paper is a reassertion of what was accepted science up until about 10 years ago.

This article discusses an approach to a problem I’d never really considered before: the growing burden of knowledge. As the article says:

“If knowledge accumulates as technology advances, then successive generations of innovators may face an increasing educational burden. Innovators can compensate through lengthening educational phases and narrowing expertise, but these responses come at the cost of reducing individual innovative capacities, with implications for the organization of innovative activity-a greater reliance on teamwork-and negative implications for growth.”

… for anyone who breeds dogs or cares about the Old Ways: please write to oppose the new federal APHIS regs! Jess sums it up well:

This post is an essential example of the blog category “Read The Whole Thing”. If these regs had been in place when I brought my three breeders back from Asia, the whole Querencia tazi family and strain would be nothing but imaginary, unfulfilled potential in Asia. Jess, who has a few more dogs than we do, would not be legally able to let her dogs sleep in her bed any more (seriously), by sudden and utterly arbitrary federal fiat.

Whether driven by a sinister conspiracy or “merely” invincible ignorance (I think chance determines more disasters than conspiracy but also that well- organized fanatics can move faster than the complacent majority), these regs must be stopped. Someone on another blog thought my use of the challenge or outright dare “Molon labe!” (“Come and take them…”) was over the top. How would you feel if the government planned to casually destroy over a decade of your work and love, your intentional and careful breeding of a unique domestic animal in a tradition thousands of years old? Now multiply throughout the nation…

I realize that not many readers are pigeon fanciers but I have been since I was eight, and pigeons are an integral part of life at Casa Q. Those who find them a bit low- class– I once reviewed a book for the TLS which was generally good, but which remarked that pigeons were unattractive, and snobbishly implied that their breeders were too– should remember that Darwin was a pigeon breeder who like all of us bored his friends with chatter about them. (The great geologist Lyell actually complained about it!) Tim Gallagher took this photo of me consulting the pigeon section of his book on variation under domestication, which preceded his explicitly evolutionary works… 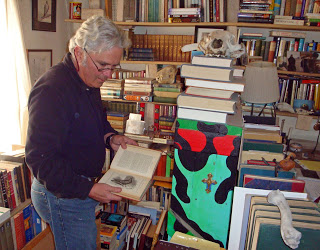 Recently two fanciers from different parts of the world sent me pigeon culture pix. John Agresto is an old friend, the former president of St John’s, a New Mexico resident when not on the road, a Classicist, and an adventurous scholar who was tapped to rebuild the University system in Iraq, and later to start one in Iraqui Kurdistan. In early life, he was a traditional New York rooftop flyer in Brooklyn, where his father was a barber (remember “On the Waterfront?). When he lived in the land of pigeon- obsessed Kurds (I have never seen a culture with more pigeon sport than the nearby Kurdish part of Turkey) he reverted to his roots and kept a loft. He sent me this photo of his favorite breed, one that the locals call “Bokharas”, which do not correspond to any of the breeds on the good Turkish websites nor to any in the myriad Arabic YouTubes. Any ideas from readers as to what they might be? 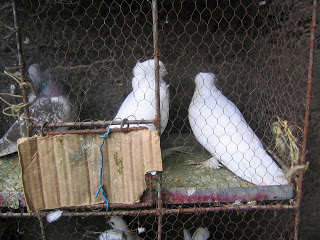 Meanwhile long- time correspondent Rabishankar Pal in Kolkata (Calcutta) India has been sending me photos of his Madras homers, both like and unlike our Belgian- derived modern racers. They are apparently both good and enduring highlyers that can evade the ever- present falcons, and long- distance homers. I wonder if they are the kind of homers that star in in the 1920’s classic children’s pigeon adventure tale Gay Neck by Dhan Gopal Mukerji? 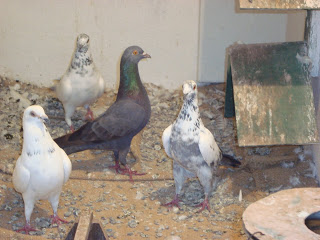 Mr Pal, after perusing Q blog, wrote an outsider’s perspective on our strange Southwestern culture that is both funny and original, and surprisingly accurate: far more so than many expressed by many romantic Nuevo incomers; they are considering putting it up at the Spur:

“Steve, you have terrific countrysides in Magdalena. Much like in Western Cowboy Movies. Gun draws, big hats, cigars, total lawlessness and a busy Sheriff, plenty of home made wine,beautiful blondes and all that. The terrains are difficult and from what I could gather Querencia does not have a big population. A perfect setting for writers, thinkers and peace lovers and of course pigeon fanciers.”

Our actual Sheriff (actually Marshall Larry Cearley, who does wear a big hat), remarked that but for more dark heads then blonde he thought it pretty much “got” us. While singer- songwriter Tom Russell, our near neighbor just to the south in El Paso, wrote: “Cool– sounds like daily life in El Paso– all of it!”

It is NOT hot here and rarely is, something I despair of making those who equate New Mexico with Arizona understand (NM is one of the highest states in the Union). Greg, Our friend and Lib’s boss at the PO, had to visit his father in Texas and sent us this pic with the label “What was I THINKING??” 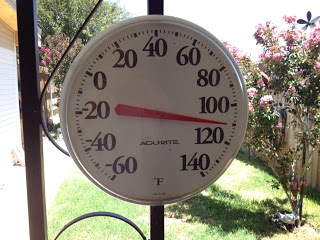 I bet he wishes he were here in the mountains cutting up mushrooms. 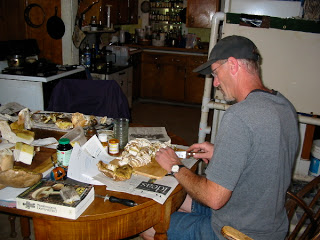 Anticipating Boletus soon (AKA Cepes, Porcini); the monsoons have returned as has cool weather in the mountains. Lib a few years ago with a choice specimen. 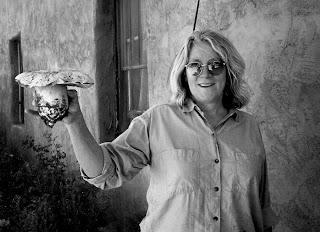 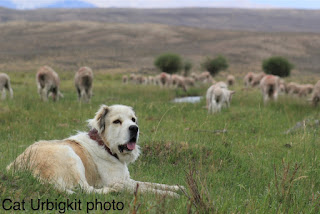 We got the sheep herd moved to new range today. We’re in the foothills of the Wind River Mountains, and this private pasture is about seven miles from where a black wolf was seen in another sheep herd the day before. Federal control efforts on this pack of sheep-killing wolves continues. Wolves in Wyoming are federally protected, so federal officials have to be involved when there are conflicts. Rant is sporting a spiked collar to give him a little more protection should the wolf pay a visit to our herd. 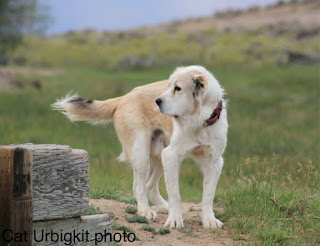 Rant has been busy marking the new turf. His elbow joint is swollen with arthritis and he’s limping, but he’s got the heart of a lion when it comes to protecting his herd, part of which is seen below, checking out the sedge grasses in the slough that transects the pasture. 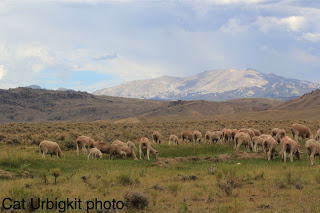 The herd shares the range with pronghorn antelope. Our ewes only have two teats, but pronghorns have four teats (click on the photo to enlarge). Can anyone tell me why? I’ve seen pronghorn triplets, but no more than that. This doe was drinking water in our driveway (runoff from the sprinkler). 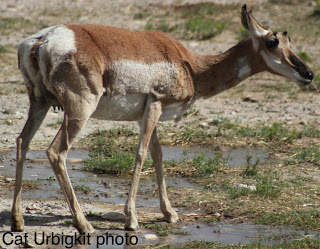 The local sage grouse population in this area is BOOMING! Large broods are concentrated along irrigated hay meadows and it is a joy to see so many of these beautiful birds. 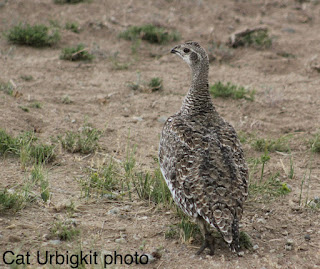 From Shiri: being silly and puppyish… 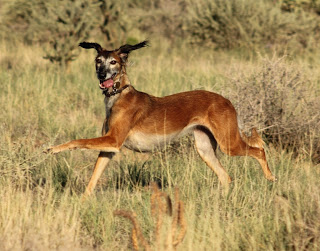