She is hunting again now, with Tavi and neighbor/ cousin Mars, and playing more including with big shaggy “uncle” Gaddi… 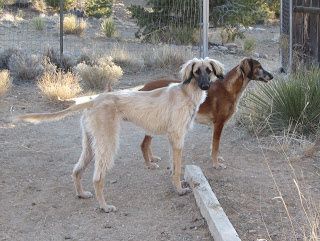 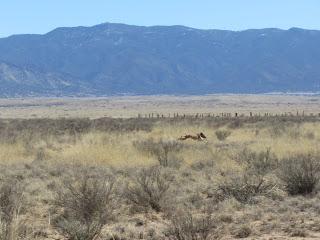 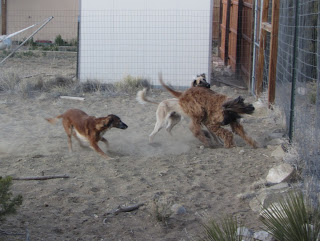 A pair of Cuban pouters I bred, at Mark’s in Iowa, tuning up for the season; a pair of old fashioned Scottish horsemen up a Tom’s on the Canadian prairie, strong enough to evade goshawks. Both are flying pouters, professional “thieves” and seducers; this video shows why, a bit (from Spain whence the game came). 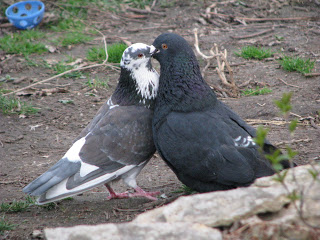 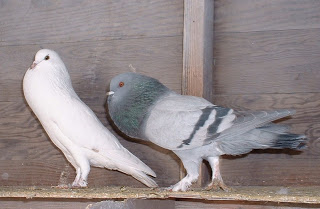 My yoga instructor is a (real not wannabe) cowgirl. Her bumper: 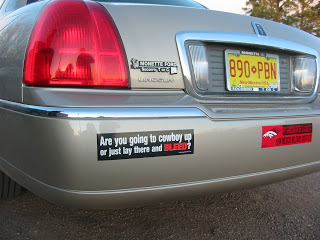 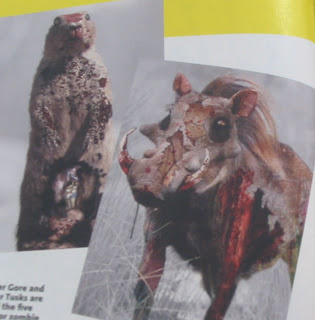 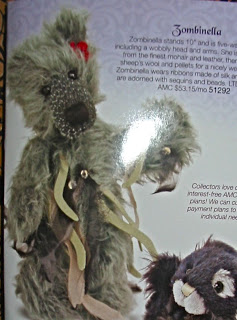 Call me old- fashioned but I would rather my grandson did not play with the facsimile of a rotting bear corpse. I’d almost rather the real thing.

Oh and– they have “cute” vampire teddys too.

The local (not bad) paper. It is probably A Good Thing that the biggest above- the- fold news is that a dog killed another. But that damn COLON….

I am getting old… 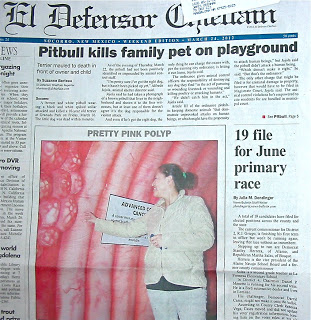 Joel’s (where he stayed), our ruin, the range, the bar, the library– as James McMurtry sings “what else do you need?” 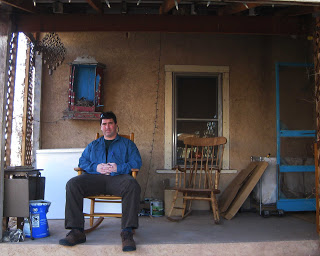 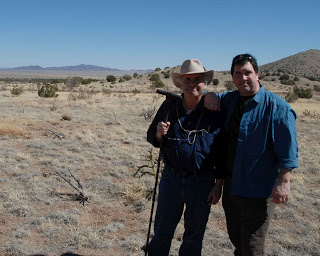 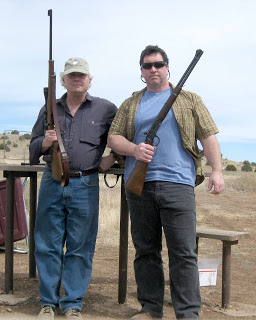 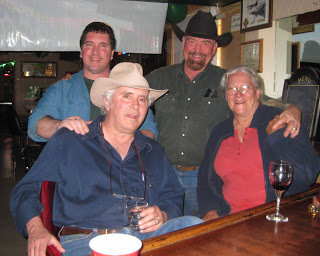 The library shot, also by George, is of me with another old friend on his first visit; Montana fine gunmaker and writer Steve (Steven Dodd) Hughes. Much good book and gun talk ensued, about which more soon… 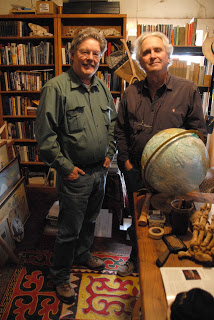 After thirty- some years in New Mexico I must confess I find “Burqueno” more natural than Bostonian. But during George’s visit, both accents provided a lot of amusement for all involved. Annie D, who spent many years there (we met at the fabled Childrens’ Zoo– use search bar for “Real Zoo” tales)– sent a long email forward of hilarious Bostonese pronunciation and usage. I have been unable to find a link, but a few examples and reactions from former and present Bostonians are irresistible.

“Definitions:
Frappes are made with ice cream; milkshakes are not.
If it is carbonated and flavored, it is tonic.
Soda means CLUB SODA.
Pop refers to DAD.
When we want Tonic WATER, we will ask for TONIC WATER. [SB: Hell no: “WATTA”]
The smallest beer is a pint.
Scrod is whatever they tell you it is, usually fish.
If you paid more than $7/pound, you got scrod.
It is not a water fountain; it is a bubblah.
It is not a trashcan; it is a barrel.
It is not a spucky, a hero, or a grinder; it is a sub.
It is not a shopping caht; it is a carriage.
It is not a purse; it is a pockabook.
They are not franks; they are haht dahgs; franks are money used Switzahland.
Police do not drive patrol units or black and whites; they drive a crewza. If you take the bus, you’re on the looza crooza. It is not a rubber band; it is an elastic. It is not a traffic circle, it is a rotary.”

Reactions: Paul Dinolo, who has known me since I was 13:

“Geeze Steve & Libby, that Anne is wicked smaht. It’s so friggin’ pissah that she knows this stuff.”

Paul McCormack, no Bostonian but another old Zooey, with maybe the best:

Dr Hypercube, who is from nearby Portsmouth:

“What? No definition of packie?” 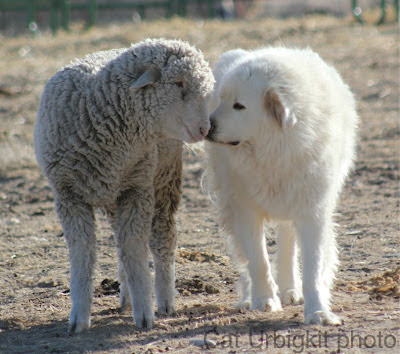 Warm temperatures have been welcome, but our snow cover is long gone, and the resulting mud has dried. The animals seem to be enjoying the spring weather. In the photo above, Rena greets Buck, a bum lamb raised by a little girl who recently moved to Oklahoma, so Buck returned to the herd.

Rena is very kind to young animals, and yesterday afternoon, flopped over on her side to let Hud the herding dog beat her up – he was thrilled. Notice the lambs and herd standing nearby. 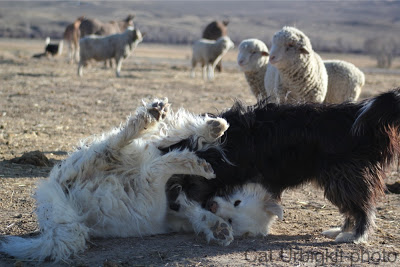 Some smart atheists (and one brilliant one, John Gray, who really doesn’t fit that or any easy definition) defend religion against “fundamentalist atheists”. HT Vic Venters.

Local naturalist John Wilson, followed by many other friends, sent in a link about the ancient cultures of Central Asia. Makes me nostalgic.

Jonathan Hanson sends a link on little dinosaurs with shining feathers (NOT birds), and Neutrino Cannon one on bears using tools.

Karen Myers sends disturbing news on the Belyalov foxes. If I were rich I’d buy two.

Allen Jones sends in the news that Tom Russell’s text for his art book Blue Horse, Red Desert is now available as an ebook.

The kind of things I might use in the book of 100. Covers are obvious, and will obviously be the majority, but here are a few other ideas.

From the top: a couple of “twofers”; a letter from Angus Cameron to Jack O’Connor, both in it, on Jack’s New Yorker review (for the Rifle Book!), and Russ Chatham’s portrait of a young Tom McGuane (both in also, several ways) for “Heart of the Game” in the first issue of Outside magazine.

Next, art and typography: salmon woodcut by Dalgleish for an arty edition of Walton’s Angler; pages from a facsimile of same; kudu from a first edition of Green Hills. Finally, a cover and some author pics: the late Robert F Jones’ first novel Blood Sport, by the guy who used to do Carlos Castenada; the jacket photo for that, when he was really BAD Bob; the mellower sporting sage that Libby knew, never quite knowing why he had such a nickname. As always click or double to enlarge.

There will be more… 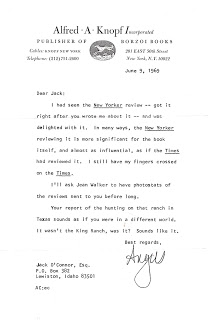 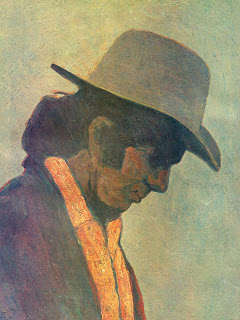 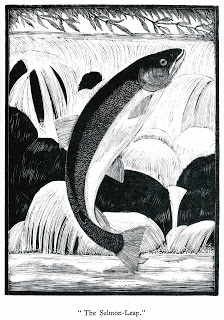 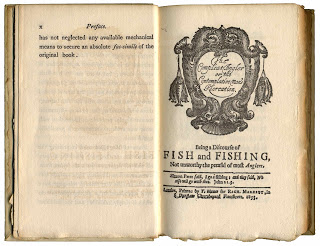 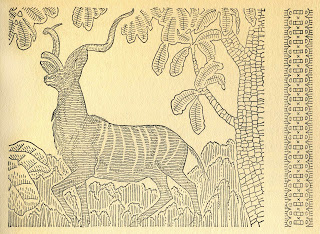 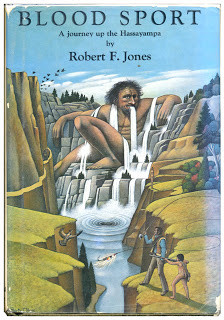 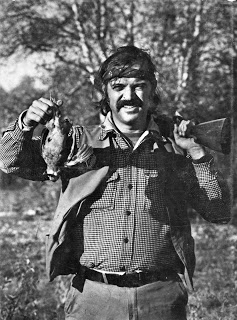 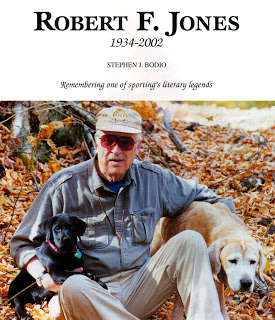