This is not an analysis of the real importance, ignored these days except in Japan, of the pioneering ethologist of insects, the 19th century Provencal autodidact Jean Henri Fabre, who started life as a peasant kid herding sheep in the harsh hills of his home country, and later single- handedly invented the study of insect behavior while more or less foreshadowing the work of such 20th century greats as Konrad Lorenz and Niko Tinbergen. Suffice to say that the only personal artifact of Charles Darwin’s I have ever handled was a straightforward fan letter from him to Fabre! Here is another– there were several– that even mentions homing pigeons!

Fabre is honored in his home town, Serignan de Comtat, in the wine country near Orange and the Rhone and Mont Ventoux, which has its own fascinating history. I visited that rather non- touristy northern part of Provence in the Nineties, and have have written about birds of prey and boar hunters and food and such there; a few of those essays are in On the Edge of the Wild. But I went there with a mission: to research Fabre, and make a pilgrimage to “L’Harmas”, his house, garden, and lab, like Darwin’s in England still preserved as though he had just stepped out for a minute. 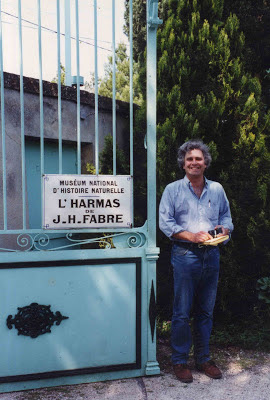 But my fan worship, and Darwin’s, paled beside that of the Japanese. I was warned, but still amazed by the arrival of a tour bus. In addition to being a student of insects Fabre was a Provencal patriot, almost a separatist, and not only spoke that odd old dialect so similar to the one my grandparents, born only a hundred- some miles to the east, did, but dressed as a Provencal herder all his days– black cowboy hat (still sitting on his bench–I tried it on) and long black cloak like a cape, boots. He just added a butterfly net.

So did the Japanese. A westerner could only stare, amazed, as a bus load of thirty or so tourists disembarked at L’Harmas, in age from about 8 to 80, male and female, each and every one in full old fashioned south- of France cowboy kit, hat and cloak and all, plus nets– and cameras. As this was the pre- digital era we are talking big SLR’s with long lenses too!

Turns out the cult of Fabre is still alive in Japan 20 years later. First see this essay: “In France, with the exception of men of letters and entomologists, few have heard of Fabre. That oft-used contemporary yardstick of recognition, Google, counts 5,670 web pages in French for Souvenirs Entomologiques and 227,000 pages for Konchuki, its title in Japanese. Perhaps there is no Japanese who has not heard of Fabre… Japanese grade schoolers know more of Souvenirs Entomologiques than do French adults.”

He is alive in every popular medium there; here is an “Edu- Manga”; a cartoon bio; here and here, two Anime characters based on him.

But I was alerted to the best by another clue in the article I quoted above: “Their [the Japanese] familiarity with the French scientist’s life work is being exploited by Seven Eleven. The convenience store chain brought out this summer a Souvenirs Entomologiques series of limited edition gifts attached to the necks of soft drink bottles.. The series comprises eight pieces — seven insects and a figurine of Fabre observing Minotaur beetles in a device of his invention.”

How could I resist? It took some emails to Thailand and “Formosa”, but I ended up with one famous Fabre insect, the “Carabe Doree”, and Fabre himself, so detailed that his magnifying glass has a lens! 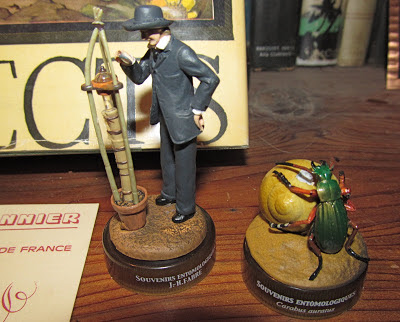 What is more, the appearance of Monsieur Fabre seems to indicate that his Asian fans respect and acknowledge his home culture. In Provence, the tradition of portraying all the professions of the country as Christmas creche figures, “Santons”, lives on, and when I was there I bought several. See the character leaning over Fabre’s shoulder? He is a local hunter, a “chasseur de Provence”, complete with double gun. 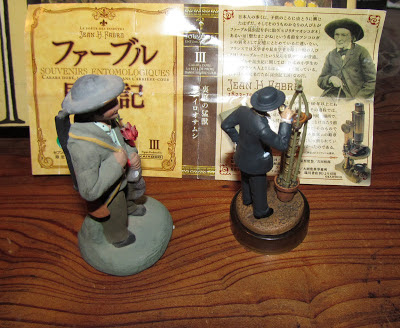