Magdalena mountains last weekend, by Elizabeth Campbell. This is less than ten miles from us, mountains thrusting up to nearly 11,000 feet from a plain over 6000, between us and Socorro 2500 feet below on the Rio Grande.

Casa Q, and just around the corner looking south to the Magdalenas, winter and early, dry summer: 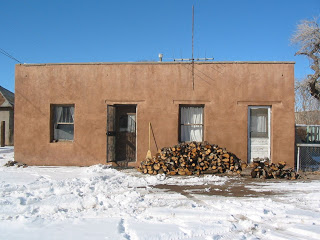 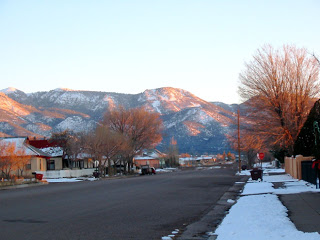 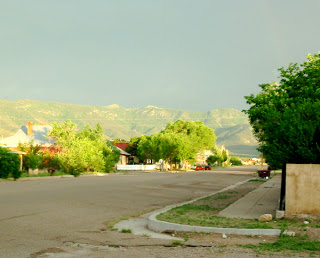 … and, looking west, a lurid monsoon sunset in July.. 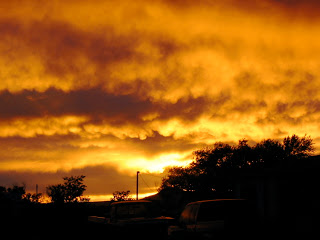 All photos within a hundred yards from where I type.

This is either overdue or redundant. But when I sent some of these to not very “Anonymous” commenter- in- chief Lane Batot, to satisfy his curiosity about the country, he thought I should blog them. The physical “structure” of the land, and its use patterns, will be utterly familiar to Westerners but perhaps a bit alien to Eastern or European readers.

From my note to Lane:

“I live downtown in a town of less than 1000 on a dirt road– the only pavement except two cross streets less than a mile long is the road through. It is 30 miles east to the county seat, 2500 feet below on the Big Rio, and there are only two towns between us and the Arizona border, 120 miles west. This east -west road, Rte 60, divides two Connecticut- sized blocks each of which has basically ONE paved road through, with well under 6000 population in the southern one. They are “filled” with big ranches, mostly public land (National Forest to the south, BLM everywhere) and a small Indian rez N. Average elevation is probably 7000 feet, peaks up to almost 11,000, cold winters, dry not too hot summers, late summer monsoons if we are lucky. No jobs & fewer people than in the cattle & mining days.”

“When Aldo Leopold was a predator controller, in 1914, he gave a talk in the no- longer existing “Magdalena Sportsman’s Hall”, to 700 people. There are just over that number now in the whole town! Then, there were upward of 5000– some say at its height almost twice that! It was a cattle shipping center with a rail spur up from the valley and a mining center.”

“No suburbs here or in most of the rural west– nothing but open land between towns. I can hawk or course within walking distance…”

Pix: town & high desert plains. I will do more town, and montane forest, later (because of our vertical range from 5 to almost 11,000 feet above sea level, we have the entire gamut of Rockies ecosystems from Canada to Mexico within 40 miles– elk and peccary, Nutcrackers and Hepatic tanagers and Vermillion flycatchers…) Please click on photos to see them larger, especially the first one.

Panorama of town in winter by Jackson, looking south. Entire town– nothing but ranches east or west for 30 miles, LESS in terms of human presence north or south. The high peaks of the Magdalena mountain range are cut off by clouds. 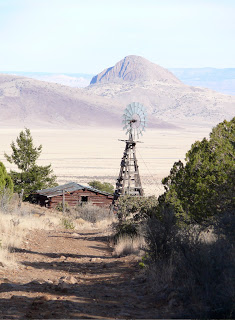 Lee’s ranch on the plain where we hunt; Lee showing Vadim Gorbatov his print based on sketches V made there. 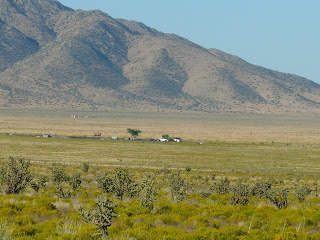 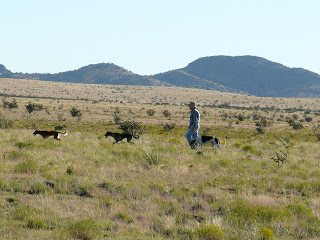 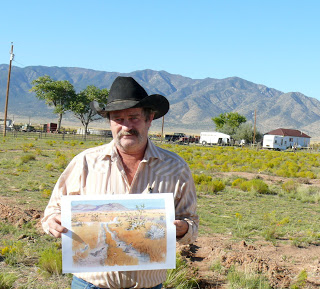 Box canyon cut below plain; Lib by seasonal “river” that cut it: 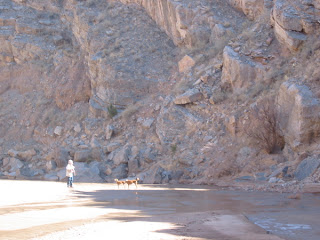 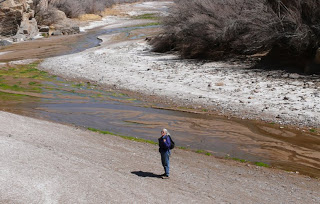 Lauren is winding up her “Apprentice Berkutchi” Fulbright in Mongolia by studying Cinereous vultures (Aegypius monachus) in the Gobi (these huge birds, which we saw in the Altai, are rivaled in size only by Lammergeiers in Asia). Meanwhile her young eagle shocked everyone by building a nest and laying (infertile of course) eggs. She has also been riding camels, which she enjoys, and seeing nesting Sakers and breeding argali sheep. We hope to see her in August; meanwhile a short note from the field.

“Hah – love the workout plan. Excellent ideas. I don’t see any reason why you couldn’t make it work. You come to Asia for dogs, hawks, eagles, or falcons, and I will see you on horseback there!
“I’ve not seen any real dark sakers yet. But lots of very light colored ones. We banded four fledglings at a nest last week, I’ll be sure to send pictures as soon as I can download them. I also climbed into my first-ever Golden Eagle nest. It was wonderful – two 3-4 week old eaglets, a clear male and female. You better believe I’ve got a picture of that! We also saw, in Dundgobi aimag, a clear-as-day Houbara bustard. I don’t think they’ve ever been noted this far east before – we were astonished. The purpose of my last stint in the Gobi was to help but satellite transmitters on five Cinereous Vulture adults, to mark exactly where they migrate to (they’ve been spotted in South Korea). I thought eagles were big – these are 22lb birds, though surprisingly laid-back once captured. Although they are prone to regurgitate – I now know what it is like to get a splat of fermented goat innards on me!

“I’m just back in Olgii now, ready to head to the countryside to visit Alema [Her eagle– SB] . I can’t recall if I told you, but she started nest building by the perch, and laid eggs! She has spent the last month on her “nest” instead of the perch. I could not believe it – for a two year old (I’m pretty sure) eagle trapped in October!

“Re: Canat’s offer for your pickup – that’s great! [He once told me he would trade a camel, a horse and saddle, an eagle, and a negotiable amount of sheep for my King-Cab 4 X4 F-150 pickup– catch being I would pay all costs shipping both ways across the Bering Straits!-SB] I can picture him saying that too. I had a herder offer to give me his horse for my binoculars (just run-off-the-mill Bushnells). He said, “I can always get another horse, but those are one-of-a-kind”.

“Thank you for the update and all the details. I really like hearing how you both are doing. When you wrote, “I am beginning to think that giving up on the life of adventure is premature” I smiled really big. Damn straight.” 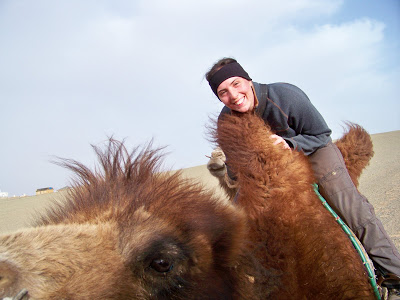 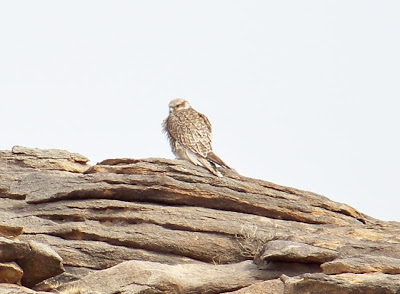 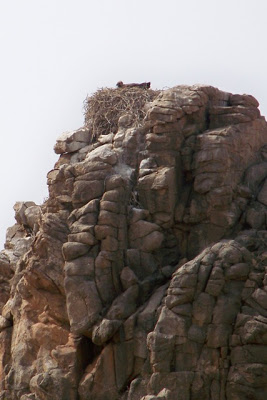 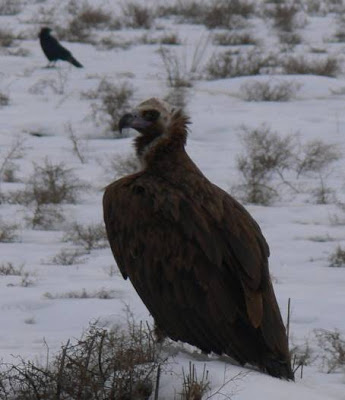 All photos by Lauren but the last, by Andrey Kovalenko.

The Peculiars were down last week and Mr. P. took this splendid panorama of our home town nestled beneath its foothills. The higher peaks of the Magdalena Range are obscured behind clouds to the upper left.

As I mentioned in “Sick as a Doorknob” below, we climbed up to this Peregrine nest Sunday. The actual pic was taken last year– there is no snow that low this warm spring.