Unbelievably, the A-K litter, Ataika and Kyran’s, the first Almaty litter in the US, turned nine yesterday. Shiri sent these photos of her Larissa and Paul’s Zoltar, still in the field… 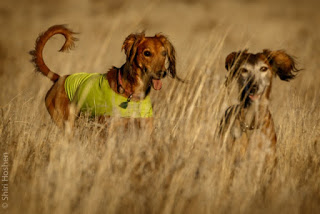 Riss with housemates Tavi and Gaddi

Here is their mother with them, the day after their birth, and two months ago, still hunting…

Tim Gallagher asked if I had ever seen an image of a hare chasing a hound, as in this portrait in stone from a Roman fort in England. Well, I hadn’t, but Herb Wells has…

The sporting poem lives– in several forms, but I like it that it does in our own vernacular and non-academic culture, not just as a barely- living remnant in England. By Dave Isely, of the threatened California coursing culture, sent by his wife Robin:

Terence Wright sent these pics from the Albuquerque gang last night. His, Greg’s, and Warren’s dogs at least are represented, and Greg’s gyr cross Spook.

I am envious– come on down! Meanwhile, right click to enlarge as always.

UPDATE: the black dog is the Kaeppler’s, of Persian and English stock- thanks, Paul D.
Our local rare blacks , from Kazakh stock, tend to have white and tan marks on the front of their breasts; not like an Arabian “tanpoint”, less anyway… a bit of  inheritance from the taigan, their mountain cousin? Shakula says of such dogs that they “have the blood of the ancient dragon,”

Tavi, and Tavo Cruz’s Luna, bred on a Dutch Salmon longdog out of our Kyran. Yes, we do use wrong names sometimes. Remember how I said big packs are sometimes less effective? This was a three dog run; they caught the hare shortly.

The following will need little comment, but it is unusually illustrative. The little red tazi with the gray face is Larissa, an Almaty dog in origin, Ataika’s daughter and we hope the next mother- to- be. The cream male is Tavi, the intended father, a mix of Kazakh genes and Russian.

What to notice is how the greyhound types dominate at first– I used to say that if a hare was caught at or before a quarter mile it was my late Plummer lurcher– but gradually the salukiformes’ endurance wins out– a catch after a mile needs tazi genes I think.

Please double or right click– these are worth enlarging! 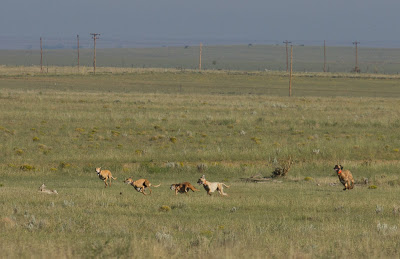 Of course, dominating the hare doesn’t mean you are a social lion– it was his big old housemate Gaddi the Afghan who brought the hare to hand!

UPDATE: a friend thought I meant tazlukis are superior coursers, or that longdogs have no stamina. Not at all– I think that a mixed pack is the way to go., and ran one in my and my hounds’ time. Good grey crosses regularly take jacks closer than most “oriental sighthounds”; if a course goes to four miles, which happens in this country, they will still be in the race, but their Asian relatives may well be ahead. I have never owned a dog of either type to quit, though for all I know some may. These longdogs catch plenty of hares and one has tazi genes; they have speed and stamina.

(Track greys are still another story– very fast and very quick to burn, run like hell in a straight line, and break easily. Many don’t have the wits to come back. Great crosses, sweet pets, dumb as a bag of rocks…)